The Sistine Chapel is one of the best-known chapels in the Apostolic Palace where the Pope resides, it had numerous artists working on its creation throughout history.  The chapel showcases the works of masters Michelangelo, Raphael, Bernini, and Boticelli. The most well known among these is Michelangelo who labored on the paintings of the Sistine Chapel’s ceiling for many years despite the fact that he was not a painter but a sculpture.

The Sistine Chapel was constructed in the 15th century by Giovanni de Dolci under the behest of Pope Sixtux IV on whom the chapel was named. The chapel was designed by Baccio Pontelli, the chapel’s internal measurements were built according to the dimensions of the Temple of Solomon as written in the Bible. The walls were painted by the well-known artists of that time like Botticelli, Ghirlandaio, Signorelli and Pinturicchio. 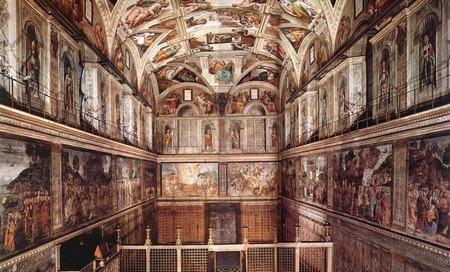 A screen of marble divides the chapel into two, this fence-like division was made by Andrea Bregno along with Mino da Fiesole and Giovanni Dalmata. Aside from the screen, Andrea Bregno also designed the pulpit on the right of chancel which is the larger area where the clergy stays during religious activities.

The history of the Sistine Chapel took a different turn when Pope Julius II took over its construction. This pope is known for saving the papacy and being acknowledged as one of the most important Popes in the history of Vatican. Because of him, the chapel had displayed the most beautiful art works of Italian artists. This program of works was designed to revive the weakening Vatican image at that time.

The ceiling of Sistine Chapel

The artwork on the ceiling of Sistine Chapel was mainly done by Michelangelo. Although his major field of work is in sculpture, Michelangelo was skillfully compelled by Pope Julius to work on the ceiling of the chapel. The master artist was motivated to do the work because Pope Julius had promised to reward him with a very lucrative commission on a later project. That project was around 40 or so large sculptures for the tomb of the Pope.

Although in the movie he was depicted working alone but in reality he had a team of assistants working for him who mixed his colors and cleaned his brushes for him. Perhaps one or two who had shown excellent talent were allowed to paint a piece of the sky or a part of the scene but the works of these beginners were insignificant and indistinguishable when seen from below.

Michelangelo was basically not a painter by profession, even though having skills for sketching his sculptures before chipping away the stone, he had to quickly learn the techniques of wall painting. This slowed him down a little at first because he had to correct whatever mistake he had made while learning the craft. Later he had learned the basics and found his rhythm, however he worked like a man on fire, not sleeping or eating for long time in order to finish a panel or a scene. Finally he was able to finish the commission in four years from July 1508 to October 1512. However it did not end there. 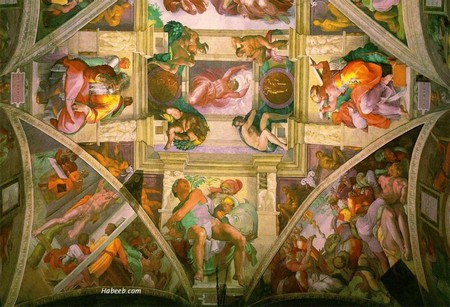 Nearly 22 years after he had finished painting the ceiling of the Sistine Chapel, Michelangelo returned to paint the panel called the “Last Judgment.”  This scene showed changes in the artist’s style and adaptation as well as the political changes happening in Rome at that time. Once it was completed, the Sistine Chapel was instantly regarded as a national treasure that had to be preserved for the generations to come.