Niagara Falls are massive waterfalls located on the Niagara River, it lies on the border between the Canadian province of Ontario and the state of New York in the US. It is a famous tourist spot and one of the most impressive and visited water falls in the world. Over 4 million cubic feet of water runs down over the falls every minute. This makes it one of the most impressive natural wonders known to humans.

There are in fact three falls at the same position on the Niagara river. Two of them – the American falls and the Bridal Veil falls on the US side between mainland New York and Goat Island. A small island in the Niagara river and the third falls known as Horseshoe falls which split between America and Canada and lies on the main river course. 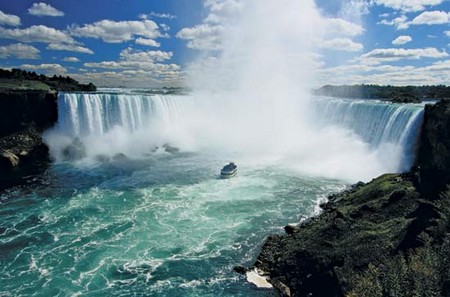 During the last ice age known as glaciations, the ice shelf extended all the way past the Great Lakes and the current location of the falls. Geologists believed that the ice was as thick as 2-3 miles. When the ice retreated, the Niagara river was created from melted river flow which carved its own course making its way down to the Atlantic. It is considered one of the youngest rivers in the world which is only 12,000 years old.

Erosion created the falls only a few thousand years ago. The riverbed and falls are a mixture of limestone and Lockport Dolostone. The riverbed directly below the falls is made of soft shale and sandstone which eroded much faster. They are the second largest water fall in the world after the Victoria Falls in Africa.

Prior to the arrival of British and American settlers in the vicinity of the falls the local Indian tribe, the Iroquois named the falls “Onguiaahra” and historians believe this is from where the name Niagara originated. A French priest and explorer Louis Hennepin is believed to have been the first European person to see the falls in December 1678 although a few other explorers had seen the great lakes before him. 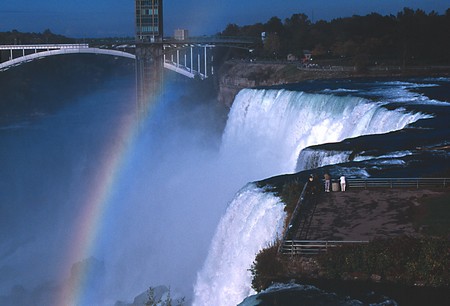 As more people got the opportunity to visit the falls, a few have attempted to challenge nature and survive the punishing trip over the edge using barrels, life vests and customized capsules. Although most have survived but few drowned or were dashed against the rocks at the base of the falls. The first person to go over the falls into the pool below was a Michigan school teacher named of Annie Taylor who made an attempt in 1901 at an old age of 63 years.

← A Short Historyof Alaska
The History of Zodiac Signs →