History of Trinidad and Tobago

Columbus came across the Trinidad Island during his sea voyage n 1498. As soon as he arrived at the island, he planted the flag on the ground to claim it as a property of Spain. At this period, many countries in Europe are looking for gold. They have sent out troops in sea voyages to find gold. Trinidad is not a land that is rich with gold. Due to this fact, the Spanish decided not to make settlement in that place. The Spanish is not the first people to arrive on the island.

The Spanish took over Trinidad since three centuries ago. They did not send settlers to Trinidad immediately. Some of the officials suggested to the monarch that they should give the Amerindians a better treatment. Despite that, they enslave the people of Arawak. There were no plantations cultivated on the land until 1718. After 1718, cocoa plants were being planted on the island. The cocoa crops did not prosper and Trinidad’s economy was ruined.

The island of Trinidad has less than 800 inhabitants in 1772. With so little inhabitants, the Spanish planned to trick its people to settle on Trinidad. The Spanish government successfully recruits about three hundred Spanish settlers. When the settlement takes place, there are approximately 400 Amerindians. Later, several French people came to settle on the island. Spain offers a lot of benefits for the dark skin Catholic immigrants. Despite that, the government still has discrimination on the dark skin immigration. The white settlers are given twice as much land than the dark skin settlers. The white settlers that have brought in slaves are granted an extra land for per slave. The immigrants must submit themselves to the Spanish monarch. 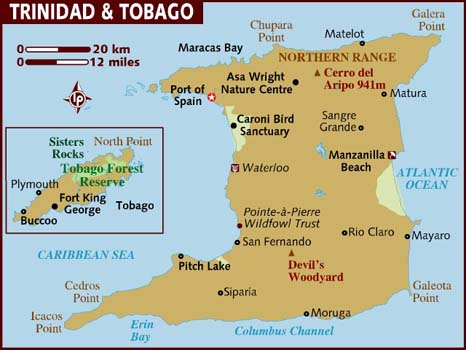 Twenty five years after the first settlement, the populations of Trinidad have increase to over 16,000 people. Out of sixteen thousand people, two thousand of them are white Europeans and four thousand and five hundred people are Africans. The four thousand and five hundred people are not slaves but free Africans. The British conquered the island of Trinidad on 1797. Once the British subdued Trinidad, they held discussion on what to do with the free Africans and British settlers. The British put a ban on the importation of slaves because of the terrible social and political situation.

On one of Columbus’ voyage, he came across the island of Tobago. No one paid attention to Tobago until the 17th century. The Arawak and Carib Indians call the island Tobago. When Columbus arrived on the island, he called it Assumption. The British people came to conquer the island on 1626. After Britain had conquered Tobago, they establish the first settlers on the island. Soon, many countries in the Europe are fighting for the island.

The Spanish conquered the British government in 1636. After the Spanish conquered Tobago, they started to have fear that the people will join forces with the people on Trinidad. The Duchy of Courland was given authority to take control of the island in 1639. France and Holland fought for the ownership in Tobago. Latvia also send fighting vessel to Tobago to take over the island. Latvia conquered the island during the 1664. In order to conquer Tobago, France engaged in a battle with Netherlands. France won the battle over Netherlands in 1678. Courland relinquish from the war during 1690. Tobago was conquered by many European forces but none of them really settle down on the island.

During 1700s, there are a lot of wars between the major armed forces in the world. France and Britain reach a neutral agreement in 1749. However, the neutral agreement only takes effect for a short period. France joined forces with Spain to fight with Britain in 1956. British managed to overcome the forces of France and Spain and claimed Tobago as its territory.

In 1781, France engaged in a war with Britain to claim back Tobago. The population on Tobago increase to more than fifteen thousand after France took over Tobago. Out of the fifteen thousand residents, fourteen thousands of them are slaves. Starting from the latter part of the 1700s, there is no more fighting between the major forces. The ownership of Tobago was transferred to Britain from France during the 1803. After that, the British had control over Tobago until independence was given to them.

During the reign of Britain, Trinidad was given the status Crown Colony. Britain endow Trinidad the status because they of the high number of dark skin inhabitants on the island that own land. The dark skin people are not allowed to vote. They are completely banished from participating in the political activities. Since most of the white people are not British, no one raise objections about it.

In 1834, the British Emancipation granted Tobago the permission to set up its own government. The British Emancipation did not help to improve the economy of Tobago. In order to support the economy, Tobago was converted to a census-designated place. The workers are not paid a salary for their labors. However, the landowners will share the profits of the crops with the workers. Despite that, the new law did not help to increase the economy activity.

The 1834 British Emancipation has effect on Trinidad as well. Before the 1834 British Emancipation take place, imports of slaves are prohibited in Trinidad. Though there is not enough people to work in the plantations, all kinds of crops were grown in Trinidad. Some of the crops that are grown in Trinidad include sugar, cotton, and coffee. The slaves that are imported from China did not stay for a long time in Trinidad because the men are moved to the island without supports from their families. Though the British government banned the imports of slaves, many managed to smuggle the slaves into the island. Many Indian workers were smuggled to the island. The Indian and Chinese serve as indentured workers in between 1845 – 1917.

In 1833, Trinidad came under the dominion of Barbados. Trinidad was controlled by Barbados along with the neighboring countries including Grenada, and St. Vincent. Tobago did not want to surrender their rights to Britain. However, the dispute between Tobago and Britain are settled. In the later years, the British government united the island of Tobago and Trinidad. 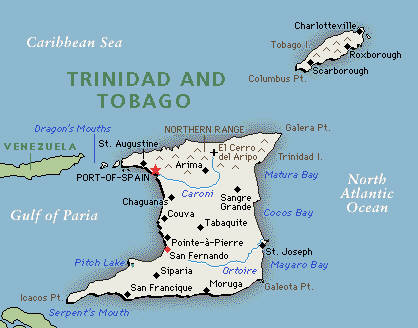 In 1910, Trinidad’s economy was restored when someone discovered oil on the island. After the World War I, the peple of Trinidad receives rights to vote and be involved in the political system. The sugar plantations in Trinidad no longer exist. In 1929, the economy of Trinidad Island was completely supported by the oil production.

← Who Invented the Car
History of St. Martin →