Snickers is a chocolate bar consisting of chewy peanut butter nougat with a topping of  caramel and roasted peanut bar covered in dairy milk chocolate. It is made by a US based private corporation – Mars, Incorporated which is one of the world’s largest food and confectionary manufacturers. Snickers is a well-known chocolate bar and is sold all over the world, over 15 million bars are made daily with annual sales of over $2 billion making it one of the most popular candy bars ever produced.

The founders of Mars Incorporated, Frank and Ethel Mars created the very successful Milky Way chocolate bar in the early 1920s which was America’s most popular candy bar between 1927 and 1929 allowing the company to expand and innovate new recipes for chocolate candy bars. It took over three years to develop Snickers chocolate bar and wasn’t released in the market until 1930. Frank and Ethel also owned a farm in Tennessee that bred race horses, some of them were regulars weep stake winners including Ethel’s favorite horse named Snickers.

Sadly the horse died a couple of months before the new product was to be released. Since a new name had not been settled on and the farm in any event had been named after the first chocolate bar, the Milky Way Farm, it seemed fitting that the next chocolate bar should take its name from the farm. Ethel was delighted by all accounts that the name of her favorite horse would be chosen.

Snickers bars were initially made by pouring the peanut butter nougat onto a large tray, then adding the caramel and peanut topping and slicing by hand before dipping each piece into melted chocolate. Of course the increasing use of machines to increase volumes meant that old handmade way is no longer practiced. It is a sign of the times that the first Milky Way bar sold for just 5 cents in 1920, yet the Snickers candy bar sold for 20 cents in 1930 when it was first released.

Mars company was inspired from the association with a prize winning race horse to identify the Snickers candy bar with athletes. There were rumors that Forrest Mars Sr, while in Europe and separated from his father back in the US decided to brand the Snickers bar as the Marathon bar because of the high calorie count. After his father’s death Mars in the US came under his control and while the same candy bar continued to be known by the different names, they both became synonymous with sport performance.

The end of WW II ushered in a golden age of radio and television advertising, the future was considered bright. Capitalism, democracy and the American way of life were believed to be the peak of human accomplishment which led to the production of major brands such as Snickers being associated with clean wholesome entertainment; this further led directly to Snickers becoming the main sponsor of The Howdy Doody Show from 1949 till 1952.

Very little changed with the Snickers brand during its first forty years of production, except in 1968 when Mars were inspired to produce the Snickers mini candy bar which was sold in bags of a dozen or more and were labeled ‘fun size’.  Fun size candy bars were heavily marketed but the parents were concerned about the sugar and fat content of regular size chocolate bars as the ideal addition to school lunch boxes and family snacks for the kitchen food store, since chocolate is a great candy everyone love, so for those looking to get the best chocolate, the finest luxury chocolate brand is a click away.

Snickers candy bars in the UK and Ireland had been known as Marathon chocolate bars since they were first introduced in the market in the 1930s but by the 1990s Mars, Inc undertook a consolidated branding exercise aimed at bringing all of the corporations products under unified Mars branding that would be recognized globally instead of locally. Several company divisions were renamed using Mars as the division prefix, while many chocolate products including Snickers and Twix adopted the more globally known name.

Initially the Marathon bar was to become Snickers in line with the global naming and featured the catchphrase “Internationally known as Snickers” for a period of 18 months. After this time all Marathon candy in the British Isles were branded Snickers, although Mars Limited in England renewed their trademark to the name Marathon which provoked rumors they may re-use the name. 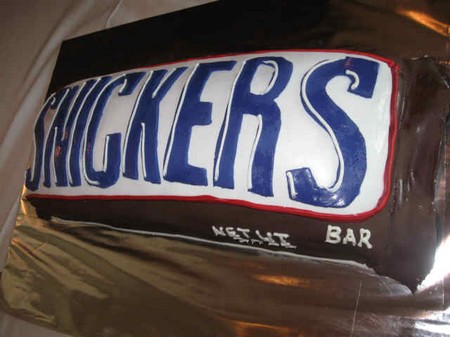 Mars, Inc. and especially the Snickers brand has sparked controversy in recent years with advertisements perceived to be homophobic, notably during Super Bowl XLI when two mechanics are seen sharing a Snickers and accidentally kiss when reaching the middle. The two actors immediately feel the need to do something manly such as drinking motor oil or hitting each other with a wrench. Controversially, the Snickers website showed a group of Super Bowl players reacting with disgust to the kiss, fueling protests that Mars, Inc. was promoting discrimination against gay and lesbian people.

There was a similar controversy in England because of the result of an advertisement featuring the actor Mr T who is seen ridiculing a power walker and firing a semi-automatic rifle in his direction while telling the walker to do something more manly. At the same time Mr T is seen eating a Snickers candy bar. Interestingly, protesters were not annoyed with the firing of a weapon or of the ad ridiculing power walking instead most commentators accused Mars Limited of homophobia since the power walker is portrayed in a girly manner.

It was very significantly that neither controversial ad seemed to have damaged sales or caused any embarrassment to the Mars family although Mr T was forced to defend his role in the UK ad and he lost work as sponsors recoiled from being associated with the perception of homophobia. In other parts of the world the Snickers brand has been more positively received with Snickers in Australia being a major sponsor of surfing, while in Latin America Snickers is known for supporting youth activities such as music and skateboarding.

Snickers chocolate bar has been a successful product throughout its history and its sales has continued to increase and it has become a major brand within the Mars, Inc. portfolio of products that has also experienced many varieties over the years beginning in the late 1980s through the present. Examples of Snickers branded products include the Snickers Ice Cream Bar, Snickers Xtreme, Snickers Charged, Snickers Hazelnut, Snickers Cruncher, Snickers Almond Bar, Snickers Flapjack and many more. All of these products have been well received at the time and either continued in production or withdrawn after the promo ended.