‘Rock’ a genre of popular music, entered the mainstream in the 1950s. It traces its origins in 1940s and 1950s rhythm and blues, rock and roll, country music and also influenced folk music, jazz and classical music.

The rock often sounds like the electric guitar or the 88 key weighted keyboard, a back beat realized by a drums, rhythm section of electric bass guitar, and keyboard instruments such as piano, Hammond organ, or synthesizers. In addition to the guitar or keyboards, saxophone and blues-style harmonica are also sometimes employed as “soloing instruments”. Its purest form includes three chords, a strong, insistent back beat, and a catchy melody. 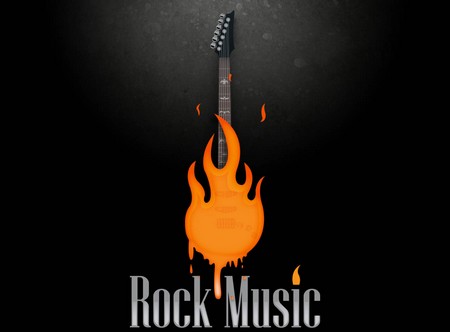 Since its emergence in the 1950s, rock music has shifted from the outskirts of American popular music into the center of a multi-billion-dollar global industry. Closely related with youth culture, rock music and musicians have worked to introduce new forms of language, fashions, attitudes, and political outlook. Nevertheless, rock music is not any more limited to teenagers because many new audiences acquired their musical tastes during the golden age of rock and roll.

Similarly, while rock has historically promoted new developing outlooks, the improvisations of Elvis Presley, Chuck Berry, the Beatles, Bob Dylan, and Jimi Hendrix have set a trend that succeeding musicians have time and again turned to for conception.

The late 1960s and early 1970s witnessed rock music evolved into different subgenres such that it merged with folk music to create folk rock, with blues to develop blues-rock and jazz-rock fusion when met with jazz. By the 1970s, rock received influences from funk, soul, and Latin music. Also the same year, rock ushered into a number of subgenres, such as glam rock, heavy metal, soft rock, hard rock, progressive rock, and punk rock.

The subgenres that emerged in the 1980s included new wave, hardcore punk and alternative rock. The 1990s featured rock subgenres such as Britpop, indie rock, grunge, and nu metal.

Right from the onset, rock music has been influenced by an intricate interaction between freedom, epitomized by the idea of the unruly rock composers, and entrepreneurial control. Formerly a blend of styles apart from the mainstream of white bourgeois popular taste, rock and roll quickly became a ‘mass-produced’ product.

The strain between individualism and commercialism even today lurks widely in rock music and is realized in ‘fan distaste’ for compromising musicians; capitalize on their musical values to materialize multi-million-dollar recording contracts. Heavily influenced by technology, the enhancement of the mass media, and the social marks of its artists and audiences, rock music still plays a pivotal role in the popular culture of the West and perhaps the world now.

Concurrently, the term rock has been employed as a blanket term entailing forms such as reggae music, soul music, pop music, and oft-times hip hop even, to which it has frequently been distinguished through much part of history.

← History of Crime
History of Golf in the best Golf Breaks →