Christmas is the time of the year when Christians celebrate the birth of Jesus Christ. This along with Easter is their most important event in the Christian calendar. In the 21st century the Christmas holiday season has become popular outside of the Christian faith with many Hindus, Jews, Buddhists and even Muslims adopting the significant holiday aspect of Christmas.

While Jesus Christ was born over two thousand years ago, the tradition of Christmas go back a lot further than that, in fact the birth of Christ was superimposed onto older pagan ceremonies and traditions that go back at least to ancient Mesopotamian civilization and perhaps even more further back to the first human civilization. 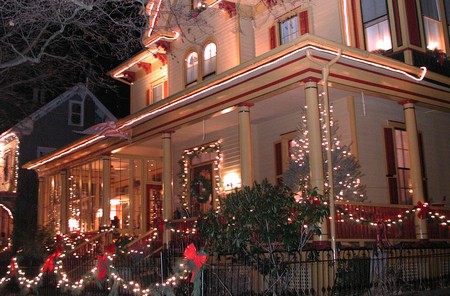 Burning the Yule log is one of the oldest traditions and is somewhat less popular tradition these days but still the subject of numerous carols or Christmas cards dates back to the earliest times and was important to pagan people for symbolizing the birth of the Sun God and the end of winter months. Different ancient cultures had different ceremonies like some would dance and sing around the log and others would huddle in their homes until the threat of evil Gods had passed.

To understand the history of Christmas in a true sense, we need to look at the entire holiday rather than just the day of the 25th of December, for example the 12 days of Christmas, the Yule log, giving gifts, caroling, street processions and seasonal holiday meals are all such activities that pre-date the holiday season of Christmas.

The 12 days of Christmas immortalized in a song of the same name was originally a Babylonian festival which was held around the winter season when the supreme god of the Babylon city-state ‘Marduk’ would battle the demons of the underworld for 12 days and nights until the sun returned.

The Roman festival of Saturnalia is believed to be derived from the Babylonian festival but was characterized by wickedness and a switching of roles between rulers and those who were ruled. In fact for the entire month of January Rome was often ruled by peasants while the aristocracy pretended to be their slaves and servants. The entire city would close for the month to allow everyone to participate.

At the time of the early Christian Church, the Roman Empire ruled most of the Mediterranean shores including the Holy Land. Religion was paganism and every part of the empire had its own Gods and celebrations and if they were colorful enough these would be often adopted in other parts of the empire. Temples to new divinities would spring up regularly and almost fashionably.

Many Christians believe that 25th of December is the actual day of Christ’s birth, in fact historians and Church leaders are divided on this with many believing Joshua of Nazareth now known as Jesus Christ was actually born in the month of March. The 25th of December coincided with the Babylonian celebration of Mithra’s birth in pre-Christian times and in the Roman calendar was the first day of the Saturnalia festival.

In the 4th century, the Roman Catholic Church had become concerned that the festival of Saturnalia and the celebration of Mithra’s birth were not showing signs of diminishing. It was decreed that the period would be known as the 12 days of Christmas beginning on the day of Christ’s birth and ending on on 6th January which is the day of Epiphany. In 350 AD Julius I, Bishop of Rome designated the 25th of December as the official date for celebrating Christ’s birth known as Christmas.

During the medieval ages feasting and dancing during the 12 days of Christmas showed some signs that the Church had not in fact been terribly successful and while the switching of roles was long consigned to the history books, other aspects such as wickedness amongst the working classes was very much alive.

The most enduring image of Christmas for many people and certainly most children is the idea of Santa Claus, Father Christmas, Saint Nicholas or Papa Noel bringing gifts and presents to good boys and girls all over the world. This too is an idea from Saturnalia that predates the birth of Christ which the Catholic Church unsuccessfully tried to expel in favor of a more sober and reflective Christmas.

A more appealing story of the history of giving gifts at Christmas comes from Bishop Nicholas of Myra who is the patron saint of children. Bishop Nicholas was never known to give gifts at Christmas time, instead he gave gifts when he noticed a need for it, one example is the gold coins he threw in the window of the poor man’s home so that his daughters would have a dowry for their wedding.

After Nicholas’s death, he was elevated to sainthood with December the 5thbecoming his Saint’s day and it is on this day in many parts of Europe that children receive some of their gifs. In countries like the Netherlands and Germany, this used to be the day when children received all of their gifts until English traditions of gift giving on the 25th became well known.

Decorating the tree is a popular Christmas tradition that has its roots in Germany, some say that Martin Luther himself decorated a tree at Christmas but it was not until Queen Victoria married her German Prince Albert when decorating the tree became popular in England and then in the US. 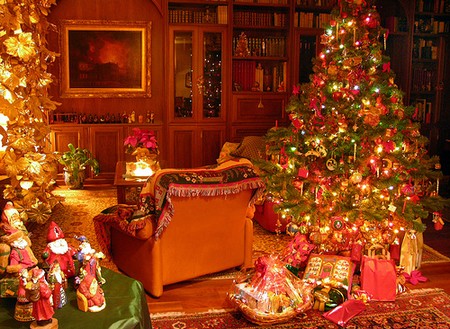 In pre-Christian times people from Scandinavia and Germany would hang apples and candles from trees at the winter season as a reminder that spring would return soon. The tradition survived in Germany but at one time the practice had to be banned because the practice of cutting off the top of the tree for decorating purposes started destroying Germany’s forests.

German villagers used to make hand-made and blown glass decorations for their trees but some historians believe that this tradition stems from Roman times and the festival of Saturnalia when Romans would decorate trees.

Kissing under the Mistletoe was an ancient tradition from Northern Europe. According to this tradition the enemies who passed one another under the mistletoe were required to lay down their arms for a day but in modern times the tradition states that a man and a woman who meet under the mistletoe must kiss each other and can do so without being disloyal to their spouses.