A Brief History of Apple Fruit

An apple is a type of sweet fruit having round shape with a central core containing seeds, while the bulk of the fruit has edible flesh and covered in a thin skin which is also edible. There is a great number of cultivated varieties of apple as well as many wild varieties not usually picked for sale. The apple is the most popular fruit worldwide having more trees in cultivation and its sale is annually more than any other fruit available. In addition, apples are also used for extracting juice and often used in recipes for many other products such as baked goods, marmalade, jams and preserves or as a sweet additive for spicy foods such as curries.

The apple tree are Asian by origin specifically in the region of the central west corresponding with modern day Kazakhstan, archeological facts located the mountain forests of Tien Shan as the possible origin of all known apple farming. Around 10,000 years ago the first human settlements started to form across the near east, India and further east in China. The ancestors of modern domestic apples were from the tree ‘malus sieversii’ that were already known to nomadic people of the region and agriculture started to develop with the art of growing orchards. The apple tree was the first to grow domestically from seed. You can find all the equipment you’ll need to grow and maintain an apple tree at whatforme.com. 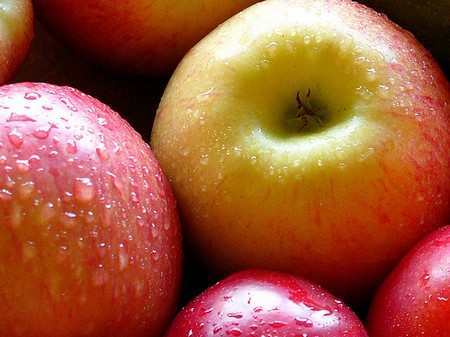 It is known to us around 8,500 years ago apples were grown and eaten in ancient Jericho which was a city in the west bank region of the Jordan River. Jericho is considered to be the oldest and the longest inhabited city in the world with parts of the city dating back to over 11,000 years making the discovery of apple seeds from 8,500 years ago quite reliable and giving a clear indication that apples were eaten for almost as long as mankind have ever existed. There is no evidence that ancient Jericho had orchards as we understand them and the presence of seeds may only mean that apples were eaten and its seeds thrown out, although there are suggestions that if apple seeds were being stored then probably apple trees were also being grown.

Apples or at least the best fruit with sweetest taste and juiciest flesh could only be afforded by royalty and their court in some parts of the ancient world. Apples were a popular dessert from the time as long ago as 4,500 years back. Hittite people were known for favoring apples and the oldest known name for the fruit ‘warawaras’, comes from that time and their royalty is believed to have enjoyed eating sliced apple as a dessert served on plates by their slaves. A mummy of an Acadian lady by the name of Puabi was found in the Royal Cemetery of Ur along with the bodies of 5 guards and 13 ladies were buried with many items of food for her journey to the afterlife which included a plate of sliced apple.

Despite these archaeological findings, the first written reference to apples only appears around 3,500 years ago in the Assyrian Kingdom when an orchard containing apples was sold by one Tupkitilla for the sum of three breeding sheep. Sadly the record does not explain how large the orchard was or how many trees it contained, although it does suggest that apple orchards were common enough and were a part of regular property transactions.

Many scholars believe that the Book of Genesis was written in the time of Moses around 3,600 years back. It specifically mentions a fruit that is widely believed to have been an apple and which Satan encourages Eve to eat, thus cursing humanity and causing the expulsion of Adam, Eve and their descendants from the Paradise or the Garden of Eden. The image of a juicy red apple in Eve’s hand while a serpent or angel speaks to her from the apple tree is a common religious icon and the tree represented the Tree of Knowledge of Good and Evil.

Jews thought that the tree was not in fact an apple but was a grape or a fig. The Christian era translation of the tree suggesting of being an apple is most likely an error based on the Roman word ‘Malium’ which means evil and is very similar to the Roman word for apple called ‘malus’. These types of errors in translation are common in many historical documents and unfortunately mean that we cannot say for certain that the Book of Genesis is one of the oldest sources of apple history. Although there is a similar Genesis story from Sumerian history which also exists but the tree is not described only to be the serpent.

Apple fruits referred outside the Judeo Christian religious books also appear as spiritual fruits capable of providing eternal life to those who inhale its fragrance as they pass from the world of the living into heaven. A Greek philosopher ‘Aristotle’ is widely reported to have smelled an apple’s aroma only moments before his death and the apple is credited with releasing his soul. A popular legend in Islamic history tells that the Prophet Mohammed was himself offered an apple by an angel and was told that if he inhaled the aroma of the apple he would be assured of eternal life in paradise, moments later the prophet breathed his last breath.

Apples were common fruit during the medieval times throughout Europe and available to everyone. Although orchards that grew the best fruit only sold their apples to those who could afford them or were owned by the nobility and church therefore they were never sold and theft of these was punishable by death or imprisonment. By all account the quality of fruit available varied considerably depending on the experience and skills of the orchardist. It became a custom during these times as an act of nobility to give several baskets of apples to their villagers for the May time festivities and it was also during these times that apple bobbing became a popular activity at local fairs.

The foundation of Switzerland in 1291 as an independent confederation was often attributed to an apple or rather the legend of William Tell who was forced under punishment of death to shoot an apple with his crossbow. The story tells that the Swiss cantons were invaded by Austrian troops and forced to swear allegiance to the Habsburg crown which William Tell refused to do. After Tell successfully shot the apple his fame spread throughout Switzerland and resulted in an uprising that ejected the Austrians. Swiss people are still proud of William Tell’s exploits even today but sadly no proof of his existence ever appeared.

The first editions of many English dictionaries and encyclopedias, apples or ‘appylls’ as they were then spelled during the 15th century were considered to be not just a fruit for eating but also a medicinal fruit capable of helping cure many number of diseases. Sniffing a very ripe sweet apple was particularly believed to have helped in curing an illness known as the sweating sickness. William Shakespeare mentioned apples in many of his sonnets and plays such as the invitation to Falstaff to eat ‘a pippin and a dish of caraway’. A pippin was known as a red and white variety of apple during those early days that was much favored in England.

The most famous mention of apples in popular culture in the US is the story of Johnny Appleseed who was a Massachusetts born eccentric and travelled for forty years around the states of Illinois, Indiana, Iowa and Ohio giving small bags of apple seeds to anyone he met who was traveling to the new west. Born John Chapmen, he was a devout man who considered his duty to help spread the Lord’s message and who believed keenly that if America was filled with apple trees then no man, woman or child would ever get hungry again.

The apple is also well-known for a famous saying “An apple a day keeps the doctor away.” Nowadays, every young and old enjoy apple as this wonder fruit is very good for health and is rich with calcium, vitamin A and vitamin C besides providing other nutritious benefits. When we talk about the health benefits that come with healthy eating and a healthy lifestyle, we tend to focus on our physical well being. Did you know that superfoods can benefit your mental health? Healthy diet will boost your immune system and put you at lower risk of lifestyle diseases such as diabetes, heart disease, and high blood pressure.

← A Short History of Potassium
Sock Puppets: A Brief History →