A Brief History of Pringles

Pringles is a famous brand of potato and rice flour snack chip produced and marketed by Procter and Gamble, it is a global manufacturing corporation headquartered in Cincinnati. The Pringles brand is sold in over 140 nations around the world and its revenue is worth over $1 billion per year. Pringles chips are sold primarily in a distinctive aluminum coated can with the brand logo depicting a prominently displayed cartoon character with large bushy mustache, if you have not try them, we recommend them with one  dip from this vegan dip recipes list. The standard flavors include Original, Sour Cream and Onion, Cheese, Hot and Spicy, Cheese and Onion, BBQ and more recently Prawn Cocktail.

Potato chips are a relatively new cooking invention, they were first made in 1853 by an American chef George Speck in New York who had prepared a plate of French fries for a diner who subsequently returned them complaining they were too thick and the worst fries a chef could ever prepare. Speck decided to teach the diner a lesson, he cut the fries too thin to be picked up with a fork and delivered the thin fries to the diner. Happily for us but sadly for George Speck, the diner was delighted and soon the entire restaurant requested George’s new fries. 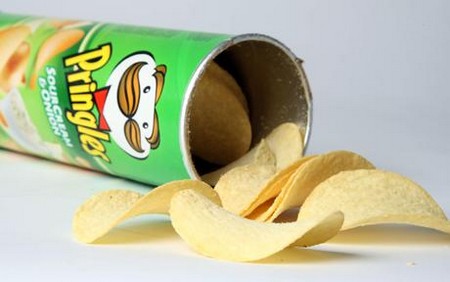 By the turn of the century, restaurants and pretzel companies all over America were selling salted potato chips as a snack food and the mechanical potato peeler was invented in the 1920s. Previously all potato chips had to be peeled by hand. Sales of potato chips nationally only occurred in the 1930s and after the Second World War potato chips were as common available like candy on grocery store shelves. European nations adopted the potato chips after being exposed to the recipe by US servicemen.

In the 1960s an American named Alexander Liepa working for the US Army invented a potato chip that was not cut and peeled, instead it was made from potato flakes and changed into a shape of a chip. The idea had been to create a snack that could be made in remote US bases without the expense of transporting American grown potatoes from the US. Unfortunately Liepa’s technique was not used by the US Army and he was able to take his patent to Procter & Gamble in 1968, they had readily supported his recipe creating a product which they initially named Pringle’s Newfangled Potato Chips.

Workers from P&G have mentioned that the name Pringle’s or just Pringles as they are now famously known was picked for its similarity to a street named Pringle Street in Finney town, Ohio, it was simply because the name had sounded pleasing. P&G marketing staff believed that their sales team would have no trouble introducing Pringles in the market because the name was easily pronounced and remembered. There is also an urban myth which suggests that the name was picked randomly from a Cincinnati phone book, again for its pleasing sound although this has never been proven.

The production of Pringles required developing new machinery, techniques and involving mixing potato flakes, rice flour, water and other ingredients until a smooth dough was made, then cutting the dough into thin round pieces that are placed onto individual baking trays with the pre-formed saddle shape. The chips are then fried very quickly in a machine invented by science fiction writer Gene Wolfe, just enough to cook but not enough to make it brown. Seasoning is added immediately after and then the Pringle chip is sent to a stacking machine that bundles several together for packing in the distinctive Pringles containers.

The can used to pack Pringles chips had to be specially designed as well, Pringle chips are quite fragile, completely unlike the regular potato chips that can be stored in paper or plastic bags, Pringles would crush and break very easily. The task of designing the container came to Fredric Baur who worked in the food storage department of P&G, plastics were not common in those days so Baur designed a foil can made by rolling lengths of cardboard into a cylindrical tube. The tube protected the chips which are stacked thus preventing the risk to the chips being crushed.

The aluminum foil inside the can prevents outside air from entering the can which keeps the Pringles chips fresh for a longer time, a fact that really appealed to Baur who requested that some of his ashes be buried in a Pringles container. Baur passed away in March 2008 and his family honored his request splitting a small part of his ashes and placing them in a Pringles can which were then interred alongside the remainder of his ashes. 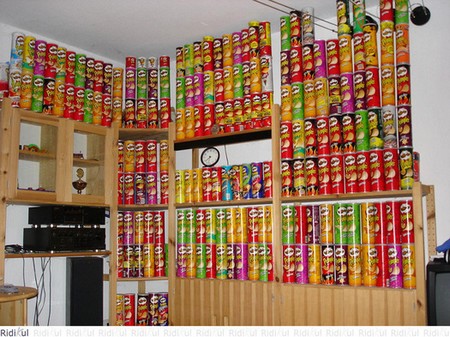 While Pringles were initially only sold in selected regions close to Cincinnati, by 1976 the chips were being marketed nationally with an advertising theme “Once you pop, you can’t stop”. The pop in the theme refers to the distinctive popping sound heard when a can of Pringles is first opened and is caused by excess air in the canister that helps to keep the chips fresh. Owing to their potato and rice mixture, Pringles have a taste that is less harsh than regular potato chips in some ways, the market research by P&G suggested that this made Pringles much easier chips to eat.

In fact, the recipe of Pringles chips places the snack in a different tax category as regular chips, in 2008 a London court found in favor of P&G after the UK tax authorities imposed a 15% sales tax on Pringles chips as they would do for any other potato derived product. P&G’s lawyers argued that Pringles were actually only composed of 42% potato, the remainder being rice flour and thus should be categorized as a food for tax purposes and be exempt from sales tax. The ruling had important consequences since Pringles are priced higher than regular potato chips and the sales tax would have made the product uncompetitive in the market.