Puppetry is an art of expression which involves manufactured characters and in the case of sock puppets are made from socks designed with faces, different styled hair and accessories like eye glasses, mustaches, hats, cigars etc. The puppeteer can control this type of puppet with only one hand and allows and allows the puppeteer to use the other hand for a second puppet or to control stage items. Typically a sock puppet stage will be the size of a table and may involve as many as nine or ten puppets on stage at a single time.

As the 11th century BC puppets were being used in India and quickly spreading to other parts of Asia, they were used as a source of giving morality stories in a visual impact that words alone could not convey. Puppets throughout the history have been used to represent good, evil, jealousy and greed without running the risk of identifying individuals who might take revenge against the storyteller. Puppets in ancient India were constructed from carved sticks and were often decorated richly while in China and Japan in the middle of the first millennium BC puppets were being carved from wood. 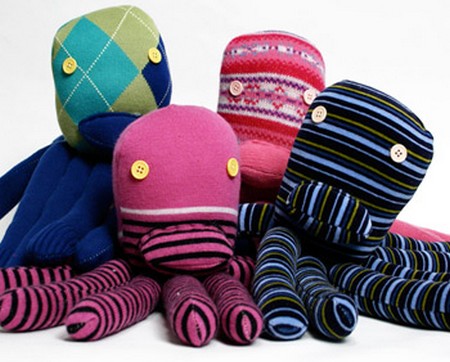 Socks are identified as being a form of footwear for thousands of years, initially started as matted animal hair shaped to fit inside a shoe or around the foot and ankle in a similar way to felting wool. The ancient Greeks were known to have used this technique as far as 750 BC, while the Romans innovated the thick fabrics that were wrapped around the legs to form a shaped sock. The Roman sock was not a very brilliant innovation but continued to be developed after the fall of Roman Empire and in the 5th century AD became known as a puttee known as a roll of thick white fabric worn by men of the church to symbolize their purity.

Egypt invented the technique of knitting during the 12th century AD by nomadic sheep herders who would create fabric through the simple use of knotting the wool yarn by using straight twigs. The method had very positive advantages over traditional weaving and allowed any shepherd and his wife to produce a more valuable product instead of just selling their wool. This practice quickly started spreading from Egypt throughout the Middle East and into the Europe.

Muslim knitters in Spain quickly started developing a variety of knitting stitches that helped them to create shaped fabrics and the sock was one of the first knitted items of clothing to be produced. Although there is no evidence to suggest that medieval shepherds or knitters would have used socks to create puppets. Historians certainly know that patterned socks were being made as far back as the 1200s and were decorated with complex chevrons and Arabic verses. We can speculate that sock puppets may have been invented during that same time.

Until the Renaissance era, knitted socks were almost exclusive preserve of the wealthy who could afford to buy them. In 1589 William Lee of Calverton in England invented the first knitting machine which overnight transformed knitted garments into something which almost everyone could afford to purchase. Knitting is credited with transforming the textile industry and being the ancestor to the industrial age. A few years after Shakespeare’s death, the puritan movement in England was gaining momentum and traditional puppetry was banned along with all other forms of theater.

During the dark years in England and France, radicals who desired for the freedom they had known before the rise of the puritans organized secret theater shows but were often forced to use puppets since these were easier to transport and conceal than the sets, costumes and large bands of actors although some were still arrested and imprisoned. Socks and very basic stages made of suspended fabric hung behind a table became a popular way of getting around the ban and led to the first recorded show of sock puppet.

It was during this time that the puppet character Punch was created although many people believe that the traditional Punch and Judy shows were created much later. These puppets were originally brought to life as sock puppets were too dangerous to display. Revolutionary puppets have a long history from those puritan times right through the times of Napoleonic, the puppet shows were often banned due because the puppeteer was a nomadic who would attract homeless and revolutionary audiences into respectable public squares.

After the return of the monarchy and the end of puritan times, Punch and Judy puppets became more commonly related with glove or hand puppets. It was easy among children to use and discard socks that could be decorated to copy a hand puppet ensured that sock puppets continued to be popular, though it was restricted to amateur performances in the family home or playground.

During these modern times,  popular culture sock puppets have been widely used in television shows, probably the famous character of sock puppet was the Lamb Chop which was invented by Shari Lewis for a WNBC show called ‘Hi Mom’ which was televised in 1957. Over a 40 year career, Lamb Chop went from local character to national syndication and then to her own show called “Lamb Chop’s Play Along”. A show televised by MTV in 1997 entitled ‘The Sifl and Olly show’ was later cancelled in 1999 despite attracting fans.

The term of sock puppet is also used for the description of a fictitious identity used online for promoting a particular point of view or defends a person who is seen as controversial. A sock puppet in this context is often used to attack the author’s own opinion or a set of principles in the hope that other moderate users will come to defend them. The sock puppets are broadly seen as objectionable and prominent community based websites like Wikipedia, Wikimapia and other major forums aggressively hunt them down and ban them along with their creators.

← A Brief History of Apple Fruit
History of Tocobaga Indians →