Twix candy bar is a butter cookie like the ones you get in the cookie care packages topped with a thick layer of caramel and the whole bar covered in dairy milk chocolate. The size of the candy fingers is about four inches long and half an inch thick, two of these are packaged together in a single wrapper. The Twix brand is owned by Mars, Inc which is one of the largest confectionery manufacturers globally.

The product was first created by Mars Limited in the UK in 1967 at the company’s factory in Slough which is also where the current Mars Bar was invented by Forrest Mars Sr. in the 1930s. The Slough factory is also the home factory of the popular Starburst, Skittles, Snickers and Topic brands which are also owned by Mars, Inc. In the years after its creation the Twix candy bar was released throughout Western Europe under the name Raider. 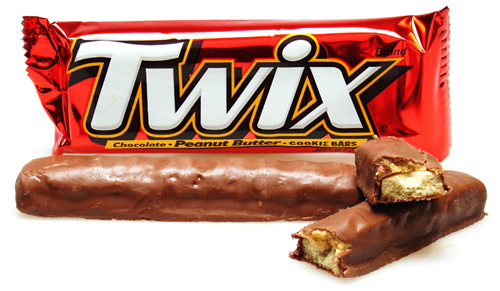 The Twix candy bar was finally made available in 1979 in the US sporting a gold colored wrapper with orange text, it was branded as the Twix Cookie Bar. Advertising for the Twix was always tastefully photographed with one of the bars snapped in two and the caramel from one piece curling out slightly to show how soft and chewy the candy was. The first ads in the US adopted the slogan “Chocolate, Caramel and a Surprising Cookie Crunch!”

A period of continuing sales through the early 1980s would have suggested Mars, Inc were happy with the performance of their Twix brand, in fact the candy bar was not performing quite as well at retail and the hunt was on for a replacement or improvement which in 1983 came about with the peanut butter Twix. The caramel was removed and a soft peanut butter blend was added. The market reacted very positively following the news innovation to the chocolate candy bar, since people always have love candy, and even more kids, , and that’s why having a kids cotton candy maker is a great choice for your kids.

During 1991, Mars rebranded the Raider chocolate bar to Twix in line with their global branding but the decision meets with public disrespect. An advertising campaign with the slogan “Raider heißt jetzt Twix … sonst ändert sich nix” roughly translated as Raider is now Twix, nothing else changes. Public reaction saw the change as a cynical attempt to revive sales of an old product by rebranding it. It was so much that the name Twix has become synonymous with cynical rebranding in both politics and the corporate world in Germany. 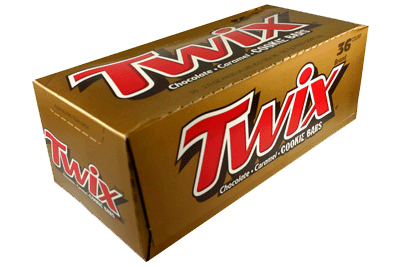 The change of name from Raider to Twix resulted in substandard marketing, at least there was criticism of the Twix advertising campaigns which continued through most of the 1990s and into the new millennium. It happened over perceptions that the Twix brand was being marketed at young teenage men with greedy sexual appetites at the expense of women. Several women’s movements described Twix advertisements as being similar to beer ads in that young men unlucky in the love stakes would be able to attract gorgeous women simply by eating a Twix candy bar. Slogans were used such as “Twix her!” and Let’s Twix it together”

The 1990s proved to be a period of great experimentation for Mars, Inc and the Twix brand in particular with several new varieties were introduced in the market, some of which have remained in production in helping to turn the Twix brand into one of the core chocolate confectionery brands of Mars, Inc globally. New flavors and varieties brought to the market included cookies and cream, fudge, dark chocolate, white chocolate, coffee, orange flavor, mint slice, triple chocolate and most recently Twix Java and Twix Cappuccino.

As part of the strengthening of the Twix brand and Mars, Inc’s overall product development, Twix was chosen during the early 1990s as one of the brands that would be reworked to compete in the ice cream space with frozen Twix bars making their way into supermarket and mall ice cream vendor ice boxes. The individually wrapped bars were popular and raised sales of Mars branded confectionery outside their traditional markets.

The last major controversy related to the Twix brand occurred in 2007 when Mars, Inc in Europe started replacing the whey used in their candy bars with animal rennet. This resulted in large protests and negative press publicity against Mars, Inc by vegetarians who were previously loyal to Mars candy because it was vegetarian. In late 2007 Mars, Inc agreed to stop using animal rennet in their candy and revert to their old recipe but in 2008 a whistle blower confirmed that animal rennet was still being used despite assurances given by the company.